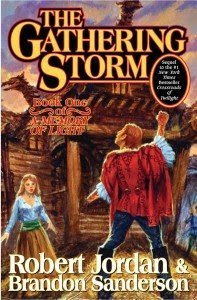 Tor's official announcement about the last novel in The Wheel of Time series - A Memory of Light - has caused a huge amount of vitriol across the interwebs.

As noted by many of my fellow bloggers, Tor have confirmed that the last WOT novel will indeed be split into three volumes (more on that later) which will be released over a two-year period.

In the face of growing fan unrest, Brandon Sanderson has written a very lengthy post in which he explains why the decision was made to split the novel into three volumes.

Now, I respect Sanderson very much. I think he's doing an amazing job, and deserves far more credit than he's being given. Sure, maybe at the end of all this he'll walk away a very wealthy man indeed, but let's put things into perspective - he's taken on the task of writing the final novel (and thus the most important) of a series that has been going for almost twenty years and has sold 30 million copies worldwide. To put it bluntly, it doesn't get bigger - or riskier - than this.

It's a hugely tough job Sanderson's got, and I really admire the way he's tackled it and the way he's trying to make things as transparent as possible. It's clear that the decision to split the novel into three was not his own preference, and he certainly should not be criticised for this decision. He clearly just wants the book to be as good as it can be, and I don't think WOT fans can ask for more than that from him.

However, the reasons he's given - which have been fed to him from Tor - are pretty ludicrous.

"By this point, I'd already warned Tom and Harriet that I saw the length being very large, but I hadn't told Tom the 700-800k number. When I'd mentioned 400k to him once, he'd been wary. He explained to me that he felt 400k was unprintably large in today's publishing market. Things have changed since the 90's, and booksellers are increasingly frustrated with the fantasy genre, which tends to take up a lot of shelf space with very few books."

Come on, booksellers surely aren't going to give a toss how big A Memory of Light is, as it'll sell by the absolute bucketful anyway. 400 pages, 800 pages, 1000 pages - it doesn't matter. The book will fly off the shelves regardless of size.

"The material that Jim left was very capacious, and Brandon saw after working with it for a while that he could not complete it in less than a total of 750,000 words. This is probably an impossible thing to bind - unless we sold it with a magnifying glass. 250,000 words is in fact a fat, or Rubensesque, novel. You will notice that 3 x 250,000 equals 750,000. So... part of the decision was based on making a book within the scope of binding technology. The major part of the decision was to get ALL the story that Jim left out there for us all."

The claim that the books couldn't physically be published in two volumes is just bullshit. The primary motivation behind the decision seems to be money - the more volumes, the more profit Tor will rake in. While I don't like to see fans getting fleeced, at the same time we have to understand that publishing is a business and with a global recession on, this decision makes perfect business sense for Tor.

It's just a shame they've tried to pull the wool over everyone's eyes by making noises about binding problems. In fact, it's pretty disgraceful.

*Please note that I've taken these word counts from the murky depths of the intarwebs, so I cannot gurantee their accuracy! Please correct me if they're wrong.
Posted by James at 13:15

Talk about all those millions of fans world wide getting a raw deal, who will in the end want to know how the story finishes yet feel obliged to buy three novels. can't help but feel fans are being shit on.

I did a big post on this. There's one explanation that I'm willing to accept that I haven't seen Tor offer up yet.

This book has already shot up from 400,000 to 800,000 words. Tor have to be worrying that it's going to go up further. Two 400,000-word novels are indeed publishable and practical, but if Brandon suddenly decides he needs another 70,000 words from somewhere, he's out of luck.

Spreading the books to three 250,000 volumes gives the author much more flexibility in case he needs more room to finish the project.

But if he stays on track for 800,000 words then yeah, we did end up getting shafted.

I have a SF&F book trilogy of Brent Weeks Night Angel and it's huge. It held up well through a read through and I'm just wondering if anybody knows the total word count of all three novels? Seems like it could be done to me.

I agree with T.D. The covers for this series have been uniformly horrible.

I stopped following this series long ago.

Adam: That's certainly a possibility. But I have a feeling Sanderson's going to try and keep it to 800,000 words...

I buy Sanderson's explanation of all of this, and Adam I think you're right about the flexibility necessary to finish books of this length (and provide proper beginnings, middles and endings). Sanderson seems like he's sincere in his desire to do the best he can for the series...but certainly Tor didn't balk much at expanding the series into three books. Now they've got a trilogy, and essentially books 12, 13 and 14. Their finances are good through 2012. But the horrible cover desing...sheesh.

It doesn't matter how many loose ends there are. Any writer should be able to tie them up satisfactorily in 1 book (2 at the absolute most). This whole series suffered from bloat and now it is happening again. They need a stronger editor (having your wife as your editor is not a good way to keep a story tightly edited).

Most authors can fit a hell of a lot of story into a trilogy so how did this series blow out to 14 books? If this was completed inside 6 books it would have been a ripper but it suffers from too much padding.

The last book should be achieved in 2 books maximum. Full stop. It is simply a money grabbing exercise. The only way to stop such disrespect of fans is to boycott buying it. Borrow from the library, borrow from a friend, download an ebook or audiobook, etc, etc.

Shame such a good concept and original story has been soured.

Feel a need to be a bit heretical here, but I actually don't mind that there's going to be three volumes instead of two. I really don't even care that the decision was probably made purely for money. The simple truth is, I gave up on ever seeing the end of this story some time ago. I have a friend who was diagnosed with amyloidosis. In the course of a year, I watched him deteriorate, loss most of his memory, and eventually die a painful death.

When I heard that Jordan had a related disease, I wrote off any hope of ever seeing "Wheel of Time" finished. So, as a person who's not grateful for many things: I am grateful that the series will come to a completion.

On a secondary point, "Wheel of Time" stopped being interesting somewhere in the middle of the third book. What captivated me as a teen just doesn't hold up as an adult. Thus, I am not waiting with bated breath. It will probably end adequately (Jordan was a fine plot architect and Sanderson is a good writer), but I'm not expecting a masterpiece.

So, let Tor milk it. The publishing houses are in trouble, they need every cash cow they can get. I hope they earn tens of millions on it. Because, unlike the music executives, whom I feel have earned their demise, I will sorely miss the big publishers. They've brought me a great deal of enjoyment. And I think that's worth the extra 25 dollars that a third hard-cover novel will run me.