Be afraid, be very afraid...

...because the US cover for The Gathering Storm is even worse than we anticipated. There was a big internet shit-storm when a 'rough mock-up' of the cover was somehow leaked onto the interwebs, leading to Tor denying that it was the final cover. The good news? They were telling the truth. The bad news? The final cover is even shitter than the mock-up.

Here it is in all its glory: 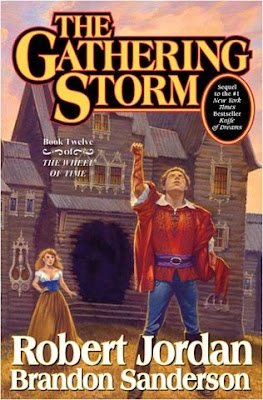 Now, there are some hideously bad US covers for Jordan's books (half of them have been featured on here at some point!) but in my opinion this is the worst. Seriously, I don't know what Tor are thinking. Seems they finally unleashed the full 'talents' of Darrell Sweet for this one. There's just nothing positive to say about it. The scene itself is dull (Rand shaking his fist at the sky after a meteorite just owned his house?), the colours are bland and, well, it once again proves that Sweet just isn't a very good artist. How he even got the Jordan gig in the first place is beyond me.

Ultimately, it doesn't matter - the book will sell in its millions even if it had a picture of a dogshit on the front cover (it comes close enough as it is). But you'd think Tor could at least be arsed to make some effort.

100% agree, here. The only thing missing is a speech bubble of "DAMN YOU, MEGATRON!!" or some other such nonsense. Not that I'd want to read the rest of this series, anyway, after plowing through the enormous first volume... but the cover art is the ultimate turn-off.

They could have squiggled the title in crayon and I would have been happier. Pink crayon, even.

Yes, this is beyond the pale - again. But I actually don't consider this to be _the worst_ WoT-cover. For me, that was "A Crown of Swords". Rand with his all-mighty biceps are... the words fail me. I just cannot get over it.

Errm. Is he supposed to have only one hand ?

God, seriously. A high school art class could do better than this. And what's up with his face?

I'm not sure Crown of Swords is worse, but it is certainly bad and also demonstrates Sweet's inability to draw human beings in proportion with the right dimensions.

As for one hand, I did wonder where the other one got to. His face looks like that of a WWF wrestler.

I'm in total agreement here, why can we not go back to the artwork of Book One. I loved the US art for The Eye of the World. There have been a couple decent covers since then, what is up?

Sweet got the gig because RJ himself requested him over 20 years ago, based on the artwork he had done for some of the Tolkien releases then. While those were not great, they were actually not total embarrassments.

As for the call to fire Tor's art department, I dunno...they've had pretty good covers...for the non-epic fantasy books they release. I wouldn't be surprised if the epic fantasy covers are designed with certain fans in mind, those who buy the type of books that generally slagged on blogs ;)

Larry: That's interesting about RJ requesting Sweet be given the job -I figured it would have to be something like that. To be fair, the first couple of covers were ok.

The thing about firing the Tor art dept was meant to be tongue in cheek, I'm not of course seriously suggesting it! But they should seriously up their game, in my opinion. Someone needs to grow some balls and tell Sweet his cover is shit and can they please have another one.

Have people not read KNIFE OF DREAMS? Yes, he's only supposed to have one hand.

As I said previously, most of Tor's covers are actually quite good. The Gene Wolfe covers for his last few books have been borderline outstanding. Sanderson's Mistborn covers were great. His Warbreaker one isn't half-bad. Tobias Buckell has had some very good covers. Same goes for Paul Melko and Karl Schroeder. The Tor versions of the Martin-edited Wild Card series are pretty good.

So what's with this "up their game" bit? It seems that the more daft covers are marketed towards those who associated said covers with certain types of stories that they want to read.

Larry, I meant that comment purely with regards to the WOT covers. With one or two exceptions, they've all been horrible. While I appreciate that it doesn't really matter (the book will sell regardless), it gives me the impression that Tor don't really give much of a toss what cover goes on the book.

That seems rather disrespectful to both Jordan and Sanderson, the latter of whom has worked his arse off to get the book done!

Still, it's all irrelevent - the book will sell in its millions anyway. But how much effort would it take to actually arrive at a decent cover? I don't rate Sweet as an artist at all, but you'd think someone could have picked a better scene for him to illustrate.

"I wouldn't be surprised if the epic fantasy covers are designed with certain fans in mind, those who buy the type of books that generally slagged on blogs ;)"

That strikes me as a very perceptive suggestion tbh. Gotta keep one eye on the market at all times...