Book review: The City and the City 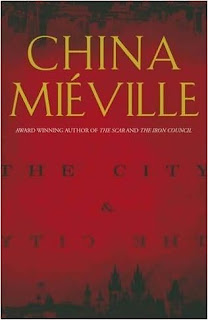 The City and the City

China Miéville, with his novel The Scar (review here), single-handedly changed the way I viewed the fantasy genre. The sheer innovation and refusal to adhere to the norm made me realise just how much potential lies in the genre, while the superb prose meant the novel transcended the usual middle-of-the-road writing that characterises many of the genre's more popular novels. In short, I was massively impressed. Subsequently, I expected great things of his new novel The City and the City.

As some other reviews have noted, Miéville actually requested an embargo on revealing the key premise that underpins The City and the City, to avoid ruining the reading experience. Given that the book has now been released, I've no idea whether this embargo is still in place. In any case, I don't really have the patience to try and explain the premise (it's certainly not something you come across every day - some will see it as ridiculous, others as brilliant). It will suffice to say that one of the main themes of the novel is borders and identity, and this plays a crucial role in proceedings.

Intriguing premise aside, the actual plot boils down to a reasonably typical crime storyline: Inspector Tyador Borlú is called on to investigate the murder of a young woman in the fictional eastern European city of Besźel. It soon becomes apparent that sinister forces are at work, and that to follow the murder trail Borlú will have to cross physical and psychological borders, as his investigation leads him to the more exotic city of Ul Qoma, Besźel's neighbour and political rival.

Miéville has already proven himself immensely skilled at portraying urban environments (Perdido Street Station is probably the novel that springs to most fans' minds, but check out his short story The Tain as well). His talent for bringing cities to life and understanding of what gives them their characteristics - their soul - is on display here in full force. The cities of Besźel and Ul Qoma - so close together, yet so distant in their respective personalities - are well drawn and developed. Miéville's prose and dialogue (excellent, as always) is largely responsible, creating two distinct atmospheres - Besźel is wonderfully bleak and almost desolate at times, while Ul Qoma is beguilingly exotic.

With a typically innovative premise that offers so much potential, two detailed, atmospheric settings, and noir-soaked, stylish prose, the stage is set for a fantastic novel. Unfortunately (perhaps even surprisingly), it doesn't happen. Two main issues hampered my enjoyment of the book, and ultimately cancel out the fine work that Miéville's done with the premise and setting.

The first is the characters - they're shallow. Disappointingly so. Take the protagonist, Tyador Borlú. At the end of novel, we know precious little more about him than we do at the start. In terms of background, there's just not enough to flesh him out - he lives alone, sees two different woman that are not aware of each other. That's it. Sure, we see his various qualities, but for me he just wasn't a character that interested me, he had no vices or obvious flaws. There was no real personal struggle or sacrifice involved in the resolution of the plot. The same problem arises with the other major characters - they're fleshed out just enough to give them some sort of personality, but again there's no depth and no real connection between any of them. Perhaps this was deliberate, to further the isolated, paranoid nature of the setting, but it didn't work for me - I just didn't really care about any of them. Compared to the various personalities encountered in The Scar, the characterisation in The City and the City comes across as bland.

The other bone of contention I have is with the plot. While it kept me guessing, events unfolded so slowly that I struggled to maintain my interest. Events did eventually come to a head late on, but I would have liked more urgency throughout the novel, a bit more action, a bit more tension. Too much of the time Borlú just seemed to plod around talking to members of various political groups, with precious little of interest happening. Perhaps this is a realistic take on a police investigation, but it doesn't make for exciting reading. I was also rather underwhelmed by the eventual revelations as to who was behind the murder. While there was one good twist, I couldn't even remember who one of the main villains was - I think he appeared in one scene about 200 pages before, a fleeting appearance, and then disappeared again until the end.

You can level other criticisms at The City and the City - some of my fellow bloggers, for example, remained unconvinced by the behaviour of the citizens and the actual practicalities involved in maintaining the boundaries between the cities and their separate identities. While I did find it hard to suspend my belief at times, this wasn't really a problem for me - at least, not nearly as much as the lack of characterisation and the slow plot.

Verdict: The City and the City hasn't changed my opinion of China Miéville - I still believe he's hugely important to the genre, and that as an innovator he's without peer. It has made me realise, however, that perhaps he's better off sticking to secondary world fiction, where he's able to draw upon the full force of his imagination. The City and the City, while far from a bad novel, is ultimately just a pale imitation of the brilliance that can be found in the likes of The Scar. Perhaps it's unfair to compare the two, given their differences, but ultimately a novel - whatever genre its in - needs to have strong characters to succeed, and in my view this is where The City and the City falls short.
Posted by James at 16:46

The City & The City was my first China novel so I can't compare it to his other works, but I think with a character like Borlu you need a sense of distance from him to appreciate what he is going through. When you get down to it The City & The City is a detective mystery and China keeps it firmly focused on that instead of trying to make it something else. Some books just aren't as character driven as others. I'm definitely going to try some other books by China so I may change my mind about how this could have gone.

Yeah, that's a fair point. It's possible that Mieville deliberately intended to distance the reader from the character so as to heighten the sense of isolation and so on, but all it really did was prevent me from connecting with him. Perhaps other readers had a different experience.

Haven't read a book by China Mieville so far. The Scar is on my shelf.
Anyway when I read a book I need a connection to minimum one character. It doesn't matter whether the character is "good" or "evil".