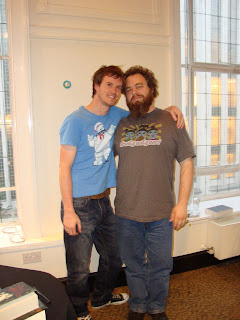 I was hoping to blog sooner about Patrick Rothfuss's appearance at Manchester Waterstones last Thursday, but Friday night was a bit messy (there was alcohol involved) and then today was taken up with dozing off my hangover in the sublime weather we're having in England at the moment. And then there was the small matter of the FA Cup final...

Anyway, to the point. The Rothfuss gig was pretty well-attended, with about 40-45 fans turning up. Not the biggest crowd I've seen (GRRM attracted well over a hundred) but it was easily one of the most enjoyable author events I've attended.

Things I learned about Pat Rothfuss:

1) He's not quite as scary in real life as he looks in photos (and man, can he look terrifying in photos!).

2) He does, however, still look like the bastard offspring of Rasputin and a grizzly bear. Which is cool, let's be honest.

3) His beard is friggin' awesome.

4) He has this amazing Santa Claus laugh. Really, it's fantastic. When that lovely beard of his eventually turns to grey, he'll make an excellent Father Christmas. 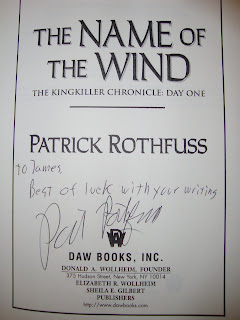 Seriously though, it was a great evening. Rothfuss is very down-to-Earth and has a great sense of humour, and provided plenty of laughs. One highlight was when a fan asked him: "Joe Abercrombie says you have the best beard in fantasy. What would you like to say back?" Pat thought about it, then eventually replied, "I'm a little jealous that Abercrombie's author photo is better than mine. I think someone should put a dent in his handsome face!" Much laughter at that, and no doubt this information will be fed back to Joe at his signing next week...

The structure of the event was pretty standard - Q&A for an hour or so, then a reading (from The Wise Man's Fear) and then the book signing. As you can see above, I managed to get my picture taken with Pat and he was kind enough to scribble on my first-edition US hardback copy of The Name of the Wind. I also picked up a paperback version, so I now have a copy I can take on the train - and thus read! Because - although there was no way I was joining the single brave soul who admitted to not having read the book when Pat asked) I still haven't read it. Must rectify that soon.

Pat confirmed that The Wise Man's Fear should surface next year. He also confirmed that there will be a third book to finish the trilogy, and then potentially a few stand-alone novels set in the same world. He said that he wouldn't have wanted the Wheel of Time gig for all the money in the world and that it's in very good hands with Brandon Sanderson, he very much enjoyed Abercrombie's trilogy, and that Nation by Terry Pratchett is a superb book. Ought to check that one out...

So overall, a great evening. Hopefully Pat will come back for another one once The Wise Man's Fear is done and dusted...
Posted by James at 18:17

Seems you've had a good time. It is always good to read that authors are real human beings...
I'm keen to read The Wise Man's Fear because I want to know how the great story which started in The Name of the Wind will continue.

Oh wow. You are reading The Painted Man for the first time and still have to read the Name of the Wind. I envy you.

Glad to hear the event was a good one and that Pat Rothfuss is a sound bloke.

I wish people (ie agents) would realise Belfast is only on the other side of the Irish sea and that there a legion of geeks who would turn up at a book signing.

At least GRRM has said he will be visiting during the shoot for A Game of Thrones. Is uppose i can't grumble too much.

The more I hear about this guy and his books the more I want to read them but I've made a promise to myself to try and only read completed series as I've tortured myself waiting for books for 20 odd years now (starting with Eddings' Mallorean series) and my poor heart can't take it any more.

I love Pat Rothfuss, gutted I missed him last week. You're gona love the Name of the Wind!

Saw Joe Abercrombie in Manchester earlier this evening, he was fabulous. Think I saw you getting a picture with him too!

Anonymous: I was 'trying' to get a picture with him...my bloody camera decided to run out of battery power at the crucial moment. Luckily John from Gollancz kindly took a pic on his Blackberry and is going to email it to me, so all is not lost.

Apologies if I'm rambling...went out for drinks with Joe, John, Darren from Orbit and his lovely wife. Only just got in...really need to go to bed...

Very lucky, I unfortunately broke my camera in a drunken mishap earlier in the week! And was clearly far too overawed by Mr. Abercrombie's presence that I barely said two words to him. Aah such is life...

Eek! You met Pat and you haven't read the Name of the Wind! And he read from Wise Man's Fear! I am extremely jealous. TNOTW is one of the best in the genre, up there with Tolkien.