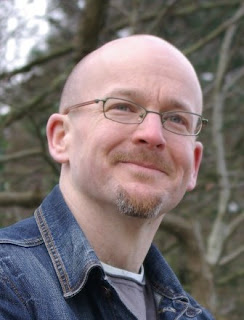 Today I'm pleased to host UK author Tim Lebbon at Speculative Horizons, as part of his blog tour. This is the fifth stop on Tim's tour, so do check out his other appearances at My Favourite Books, the Allison and Busby website, Highlander's Book Reviews and Falcata Times.

Right, let's get started. I've conducted an exclusive interview with Tim about Fallen and the genre in general, but before we get onto that, here are some bonus extras:

First up, I have a copy of Tim's novel Fallen (review here) to give away to one lucky person. Normal procedure - just shoot an email to speculativehorizons AT googlemail Dot com, with your full name. As usual, no need to provide your address - I'll contact the winner and obtain that later. The deadline is midnight next Wednesday (27 May). I'll pick the winner at random on the Thursday. Best of luck...

If you fancy being in with a chance of winning a copy of Tim's latest novel The Island, his publisher is running a giveaway here. The code to enter is LULAH.

If you've read my review of Fallen and are not sure whether it's your cup of tea, then you can check out an extract here. This extract is the fifth in a sequence, following on from those released on Tim's previous blog stops. The next will be made available when Tim visits FantasyBookSpot (BSCreview).

If that wasn't enough Lebbon goodness, here's the interview!

Fallen takes place 4000 years before the events of Dusk and Dawn, while you've also mentioned that you have an idea for a post-apocalyptic novel, called Lost Times, set in the same world but thousands of years in the future. That's quite a lot of timeline jumping - what attracted you to writing stories set in these different time periods?

After DUSK and DAWN, I wanted to move away a little from that particular time in Noreelan history. I'd created a whole new world, and the more I wrote the more I realised there was a vast history here to tap into. In DUSK and DAWN I mentioned the Sleeping Gods (and for those who've read DAWN, you might remember Hope's encounter with one), and these beings really intrigued me ... I wanted to go back closer to the time when they went down to sleep, examine what the people of Noreela back then might think of the Sleeping Gods. And there were also lots of other asides in the first two books that planted ideas in my mind ... writing those books was like dipping into the history books of a real world, and I wanted to find out more.

Writing novels set in the same world but at different times must surely mean quite a lot of worldbuilding on your part. Where do you stand on the old worldbuilding versus characterisation argument? Which is more important to a story, or are they both of equal value?

Interesting question, but I think they're two disparate aspects of writing any novel. Set a book in contemporary Wales and there's still world-building to do ... you need to make the world real and believable to the readers as it applies to the novel, because your story has to play out against a certain backdrop. A fantasy world is a step onward from that, of course, but in some ways it can be easier. This is my world, I make it all up, so I can't get anything wrong! The world itself becomes a character, and I like to think Noreela is a fascinating, complex land – it was great fun creating my own flora and fauna, landscape, people, religion, drugs, booze, and history.
As for characterisation ... it's just as important in a fantasy novel as any other. Characters bring a book to life, and the world you build for them is their backdrop. Great world, crap characters, and the book won’t work.

One of the aspects I liked the most about Fallen were the characters of Ramus and Nomi - their relationship was extremely realistic and intriguing. How do you go about creating believable characters?

I've written elsewhere about how these two characters were the initial inspiration for this novel – they introduced themselves to me, and the rest of FALLEN built itself around them. So from the very beginning they seemed like very real characters, even before I'd written their names down for the first time. I think liking your characters is important for writing them realistically, even if they're the most evil bastard ever. And real characters have both good and bad sides. Other than that ... I try not to analyse how I create my characters, in case thinking about it too much changes how it works.

While I hesitate to refer to Fallen as a 'quest fantasy', it's in many ways a traditional adventure story. What are the drawbacks of this format? Given that you're focusing on a handful of individuals, how do you stop proceedings from becoming a little stale?

Writing a quest novel doesn’t necessarily make it a cliché, I don’t think … any journey novel can attract such comments, but what sets it apart is the characters, plot, background, the soul of the novel. I think FALLEN has soul, and that resides mainly in the conflict between the two main characters. Setting them out on a quest give me an opportunity to explore Noreela some more.
As for the book not becoming stale, it’s the story that keeps it running. I think Ramus and Nomi are two of the best characters I’ve ever written, and they’d easily carry the book on their own, if I’d chosen to write it that way. But I didn’t … had far too much fun having those Serians along for the ride!
Interestingly, the fourth novel in the Noreela sequence, THE ISLAND, is set entirely in a coastal fishing village. Maybe I’m getting comfortable enough with Noreela to not have to explore it every time.

In my opinion, too many fantasy authors seem content to trot out the same bog-standard story in bland, copy-cat medieval worlds. How important therefore is innovation to the genre? Does fantasy need to become more innovative to truly thrive? Or is nothing truly original anymore?

I often hear the ‘nothing is original’ argument, and I think it’s sometimes used to criticize lazy writing or sub-standard plotting. When I set out writing books set in Noreela, I was excited about creating this new world, and also keen to not mine the usual fantasy tropes such as elves, unicorns, dragons etc. Not that there’s anything wrong with these, in the right hands … I just didn’t think my hands could carry them. So I set myself a challenge, I guess. Really enjoyed it, and I hope it paid off.
Innovation is obviously a good thing for any genre, because some people like reading new, fresh ideas. Some people, however, like reading stuff that’s quite familiar. I think FALLEN is a little different, and I always set out to try and be original. I write what interests me, what I want to write, and it usually turns out OK.

The mainstream view of fantasy generally tends to be negative. As a fantasy writer, does this bother you? Furthermore, does it even matter?

It’s a pigeonhole, and for those outside who don’t read this particular genre, it’ll always be viewed in a certain way. Horror gets the same treatment—I don’t know how many times I’ve told people I’m a horror and fantasy writer and they say, “Oh, monsters and dragons?” and then admit they’ve never read either. You can’t alter perception (which in these people is usually dictated by how horror and fantasy are represented in cinema, anyway, rather than a result of genre books they might have read), other than by forcing them to read something they wouldn’t otherwise. I’ve given my books to loads of people around my village, and inevitably the response is, “Wow, that wasn’t what I expected.” Preconceptions exist, and always will. Does it matter? Of course … if everyone was a little more open-minded, we’d all sell more books.

Going back to Fallen, I was intrigued by the Serians and their dangerous homeland of Mancoseria. Can we look forward to seeing more of this wild land and its people in future novels? Surely there's a story in there somewhere?

Never say never. I’ve nothing planned at the moment, but they do intrigue me (I’ve been accused of examining their background a little too much in FALLEN, but I think the Serians and their history are fascinating). Maybe one day.

Moving on to writing in general, what does you daily routine look like? Do you have a daily word-count that you strive to meet come what may, or do you just take it as it comes?

I’ve got a wife, two kids and a dog, so I tend to work ‘normal’ working hours, from 9 to 5-ish. I work evenings as well, much of the time, and sometimes early in the morning. As for word count, if I’m stuck into a novel I aim for 4,000 words per day. Occasionally I write more than that, sometimes less, but setting a target helps. I work well to deadlines, so I’ll set a personal one if there’s no contractual deadline yet in writing.
I also quite enjoy days like today … doing this interview, a novel proposal to work on later, and a short story to polish before sending off. But in a few days I’ll be keen to get back into the novel I’m currently writing with Chris Golden.

All writers seem to have different methods of writing. Some outline in great detail, some in a little detail, and others don't bother at all. What's your preferred method?

I start a novel with an idea, then a few pages of random notes, and from this I’ll come up with a proposal (which my publisher usually needs to make an offer). I then completely ignore this and launch into the first chapter. There’ll be a vague shape in my head, and I plan a few scenes or a couple of chapters ahead as I go. So there’s never a detailed, overall plan … writing a novel for me is often like reading, and I’m always keen to get to the end to see what happens.

What has been your biggest mistake that you've made as a writer?

I’ve no regrets. But I have great plans.

Many thanks to Tim for the interview and to his publisher for giving me the chance to take part in his blog tour! Check out Tim's website here.
Posted by James at 12:57