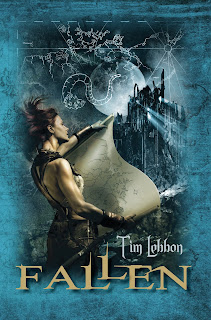 Tim Lebbon's one of these interesting cases: a New York Times best-selling author, a winner of multiple awards including a British Fantasy Award for his novel Dusk, and yet his name rarely seems to crop up in online discussion.

I'd been meaning to check out Dusk ever since I read part of an excerpt and quite liked it. I was therefore pleased when Lebbon's UK publisher, Allison & Busby, kindly offered to send me a copy of his latest book, Fallen.

Taking place in the world of Noreela - the same world that features in Dusk and its sequel Dawn - Fallen is both an adventure story and an examination of how sometimes the personal psychological journeys we undertake are more significant than the physical.

Ramus and Nomi are members of the Guild of Voyagers, an organisation that seeks to explore the untamed wilds of Noreela and reveal them to the rest of civilisation. When they obtain some obscure documents from a mysterious traveller, they set about preparing for the voyage of a lifetime. Their destination is the Great Divide - a massive, sheer cliff that borders one edge of Noreela and rises up into the clouds. They're travelling into the unknown, as no one has ever scaled the cliff. While the thrill of discovery is a motivating factor, it's the promise of what is hidden away atop the Great Divide that drives them on. If the ancient documents are accurate, then what they will find at the top of the Great Divide - if they ever reach the top - will change the world and re-write history.

I think what attracted me to Fallen was the adventure angle. I wouldn't go as far as calling it a 'quest novel' (why does that term seem so negative these days?) but it's certainly a book about journeys, both mental and physical, which is a throwback to the kind of stories I read when I was younger. It had been a while since I'd read a novel that focused solely on the travels of a group of companions, so I was eager to see what Lebbon could do with the idea.

The crucial thing for this sort of story, in my opinion, is to get the characterisation right (of course, this is crucial for all novels - but particularly so when the entire story focuses on a handful of people). Sure, the characters can battle all sorts of monsters and explore cool exotic locations, but if there's no conflict within the group, no friction in their relationships, then the whole novel is going to fall flat.

Fortunately, Lebbon does a commendable job here. The relationship between the two protagonists, Ramus and Nomi, is both complex and believable. I very much enjoyed seeing them struggle with their feelings towards each other, and the problems that were caused by the involvement of a third party (which resulted in an intriguing triangle of emotion). Ramus and Nomi's relationship is really what drives the story on in the earlier part of the novel. You know an author is doing something right when not a lot is really happening, yet you're utterly hooked. It only becomes more intriguing as dark secrets start to be revealed.

With the strong characterisation firmly in place, the stage is set for a decent adventure. Lebbon delivers again, giving us some exotic locations and plenty of confrontations with nasty flora and fauna. He also drops a few interesting hints of worldbuilding into the mix that I would like to have seen more of - the wraiths, for example (perhaps these appear more prominently in Dusk and Dawn, or if not then maybe they will appear in future books). There's even a Mieville-esque aspect concerning a multi-limbed character, with reference to a 'chop-shop' which I really liked, and again would like to see/hear more of.

Another strong element is Lebbon's prose. Rich and fluid, his action scenes are tense and gripping, while his descriptive writing benefits from his ability to throw in a bit of lyrical verve. Fallen is subsequently a joy to read - I flew through it at rapid speed, which doesn't tend to happen a lot these days. Character introspection is present and correct, adding depth without hindering the flow of the story, and exposition likewise (one of my pet peeves are authors that can't handle exposition properly - more than a few popular new writers seem to have no idea how to do it).

Unfortunately, despite the novel's strong start, it unravels in the final third. I once remember reading someone's complaint about the inevitable moment in adventure fantasies where the group of companions splits up, and how the story often seems to nosedive afterwards. This is not a complaint I would level at Fallen, though it does happen and I must admit I enjoyed the story more pre-split than post-split. Hard to say why without giving spoilers, but I felt the split had a negative impact on the characterisation of the novel, which for me is its strongest point in the first third.

The main complaint I have with Fallen concerns the events in the final third of the book - it just felt like a bit of an anti-climax. Again, it's hard to say why without spoiling the story, but I felt like the whole book was building up to what they might find at the top of the Great Divide, and most of what they did find just seemed to fall a little flat. That's not to say that the ending isn't suitably epic (it is), but even here we have a problem in that there's no real resolution, and this rankles.

Verdict: Despite the anti-climax resulting from a weaker final third, Fallen is still an enjoyable and very well written novel. Lebbon's skilled characterisation adds serious depth to a standard adventure story and his accomplished prose means the story flows well and is hard to put down. He also shows flashes of worldbuilding that possibly hint at more intriguing things to come, and I for one will definitely be checking out his next novel in the Noreela series, The Island.

In addition, I'm pleased to be hosting Tim on his blog tour. Check back on 20 May for an interview. Um...hopefully. I've not actually sent over the questions yet, so no surprises as to what I'll be doing this Sunday afternoon!
Posted by James at 08:37

Nice one, just bought this last week. I will be sticking it in the suitcase when I go on holiday.

Hope you had a good time in Bella Italia. I'm off to Rome and Siena at the start of June.

Seeing as you are from Manchester would I be wrong in thinking that you enjoyed the football at the weekend?

Iain, I'll be interested to hear what you think about Fallen. Definitely a good holiday read.

I had a great time in Italy thanks, pics to follow shortly. Hope you enjoy your own trip! I'm hoping to head back in September/October.

You would be wrong, yes! While I do live in Manchester, I'm originally from the South-East and am subsequently a Chelsea fan.

I speak as an embittered Liverpool fan:). Mind you our teams provided the game of the season with the second leg of the Champion's league quarter final.

I studied Ancient History and Byzantine Studies at university so the Med feels like my spiritual home. If you haven't visited Rome you really should, if you have try Florence. Two of the greatest cities on this wee planet.

Contrary to popular opinion, there's no more Utd supporters in the South-East than there are anywhere else in the country! Most of the kids I grew up with supported the London clubs. And yeah, that 2nd leg was unbelievable. Hopefully we'll avoid each other next season though!

Ancient History, eh? I did history as well, just a generic course with no particular focus. Maybe I should have done Ancient History too...

Not been to Rome; it's on the list. Been to Florence before, lovely place as you say. Hopefully gonna go again soon.