Before we go any further, Kraken is not a Bas-Lag novel. Still, it sounds really cool and the artwork is hot.
Here's the UK cover: 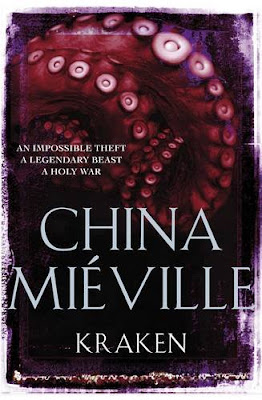 And here's the new blurb:

"Deep in the research wing of the Natural History Museum is a prize specimen, something that comes along much less often than once in a lifetime: a perfect, and perfectly preserved, giant squid. But what does it mean when the creature suddenly and impossibly disappears?

For curator Billy Harrow it's the start of a headlong pitch into a London of warring cults, surreal magic, apostates and assassins. It might just be that the creature he's been preserving is more than a biological rarity: there are those who are sure it's a god.

A god that someone is hoping will end the world."
I love the cover - I really like the design and the colour scheme; that frayed, purplish tinge is bang on the money (presumably the white edge is not part of the cover). Incidentally, the US cover can be found here. It's not nearly as good.
As for the novel not being set in Bas-Lag...I don't really care, since the story sounds so cool, and a welcome return to pure weirdness after the disappointment that was The City and the City.
Really looking forward to this one - roll on 7 May 2010 (29 June 2010 in the US)!
Posted by James at 20:23

It's not a Bas-Lag novel, but isn't it part of the Cthulhu Mythos?

I'm looking forward to reading it *because* it isn't set in Mieville's usual world, I'm interested to see how he writes other things as well. (I suppose Un Lun Dun counts, but it *does* reference the Bas-Lag world...;-)

Also, the UK cover is WAY better than the US. *grins*

China Mieville writes HP Lovecraft, god i hope so. So far i have loved everything Mieville has written, Bas-lag or not, i mean who else could get away with killer umbrellas, or write about recieving a manuscript and being chased by a secret cult (early HPL reference maybe). As for Lovecraft well..pure class, even if he was an American. I've just discovered Feedbooks, the free e-book site and all of Lovecrafts work is there free in epub format.

It sounds interesting, but I will have to pick it up from the library. I couldn't make it more than a few chapters into The City & the City before it gave me a headache (something about the phrasing, and I am serious about this, tried a few times to get into it with the same result each time). Hopefully it will only be that book giving me issues. Terrible US cover though...

I have to say I think the UK cover really is superb.

I like this cover quite a bit, and it doesn't hurt that this sounds like a very intriguing premise. I'm perpetually interested by the synopses to Mieville's novels, although I'm still yet to read one of them. I recently bought Perdido St Station, though, so maybe now is the time to get into him, as a new release approaches.

I saw the cover the other day and you beat me to posting it. It's amazingly well done. And I'm very excited by the blurb.

I'm liking the new paperback cover to The City & The City too though haven't tried the contents yet.

I've only read the sample introduction of The City & The City on Amazon, and I liked it. Kafka-esque while retaining a voice of his own. It may be in the end a pretty basic crime novel, but that was the intention, wasn't it? Well, I can't say for sure, obviously, but maybe it's just a matter of taste.