Some filthy festive book pr0n and an early resolution

Santa obviously decided I'd been a good blogger this year, as he brought me this tasty haul of books: 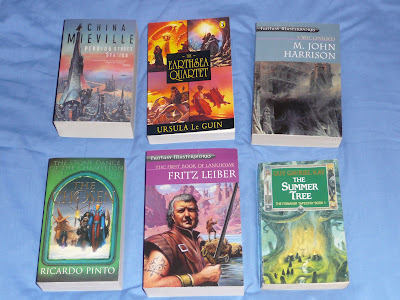 I thought Mieville's The Scar was superb, so am looking forward to checking out Perdido Street Station. I think I read A Wizard of Earthsea way back in my younger years, but have always wanted to re-read it since it's a classic of the genre.  M. John Harrison is a name I've heard mentioned here and there, and not often in a positive way (though I rather suspect that this negativity has more to do with his infamous "worldbuilding is for geeks" argument). Anyway, I'll get the chance to check him out with Viriconium. Ricardo Pinto's The Chosen didn't appeal to me when it surfaced at the start of the decade, but my tastes have developed since then and now I'm intrigued enough to give it a go. I've been meaning to read some Fritz Leiber for a long time now, so Santa's kind delivery of The First Book of Lankhmar gives me the chance. Ditto for Guy Gavriel Kay - heard many good things about him, so am expecting decent things of The Summer Tree (sounds quite traditional but I'm kinda in the mood for something like that).
You might have noticed that all these books are pretty old - I think the most recent is Perdido Street Station, and that was published in 2001. The reason for this is because my blogging resolution for 2010 is to read more genre classics. I still consider myself inadequately read in terms of older books in the genre, so really want to rectify this next year. In 2009 I caught up with many of the more recent big releases (The Name of the Wind, The Painted Man, etc) but I feel now it's time to check out some of the older big guns.
Anyway, that's for next year. Right this minute, I'm going to go off and see if I can find some more chocolate and beer. Hope you're all enjoying your holiday season! :)
Posted by James at 18:58

Looks like a good selection to me - all books that I've either read or been considering reading. The Chosen was a bit of a disapointment though - superb worldbuilding, but a very weak story if you ask me.

I haven't read Kay yet (hopefully will rectify that in 2010) but everything I've heard indicates that you shouldn't judge him based on The Fionovar Tapestry.

The Summer Tree is very traditional fantasy fare and none the worse for it.

At last you have a Guy Gavriel Kay book to read! His later novels are much better but I have fond memories of reading the Fionavar Tapestry.

I may be wrong but I think GKK helped Christopher Tolkien to pull together JRR Tolkien's notes onto what became The Silmarillion and all the other Middle Earth expansions.

Albertosaurus - interesting that you felt the story was weak, I look forward to seeing what I think.

Kevin - agreed, I've heard many good things about his later works. I'll be sure not to judge Kay off the back of his early series.

Iain - you're right, Kay played a large role in the Middle Earth appendices and so on.