Cover art and blurb for 'The Sorcerer's House' 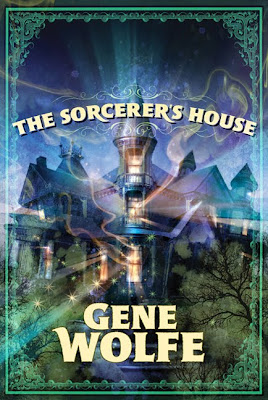 And here's the blurb (or at least the one that I could find, since there's not one on Amazon yet):
"In a contemporary town in the American midwest where he has no connections, an educated man recently released from prison is staying in a motel. He writes letters to his brother and to others, including a friend still in jail. When he meets a real estate agent who tells him he is the heir to a huge old house, long empty, he moves in, though he is too broke even to buy furniture. He is immediately confronted by supernatural and fantastic creatures and events."
I'm not particularly taken with the artwork, though it's ok. The premise does come across as a bit standard, however from what I understand the story is told through a series of letters, so it may be interesting to see how effectively Wolfe can reveal the setting and characters through this method.
Potentially one to watch next year.
Posted by James at 08:59

I'm not wild about the cover, either. It almost looks like a YA-childrens book, which isn't to say it looks bad, but it seems to miss the mark for my tastes.

I was gonna say the same thing as Logan..my first thought when seeing that cover was that it must be a YA book.

I think it looks quite YA, too. I like the premise, though. I haven't read any Wolfe yet, so may have to try to dig in.

Yeah, my initial thought was whether the book was YA, though I've not found any confirmation. Sounds cool though.

James,
I found a PDF - Tor-Winter2010 - somewhere on the net. And it contains information about The Sorcerer's House. It is described as a "new contemporary fantasy novel".
The blurb contains one more section:
"His life is utterly transformed. We read on, because we must know more and we revise our opinions of him, and of others, with each letter. We learn things about magic, and another world, and about the sorcerer Mr. Black who originally inhabited the house. And then, perhaps, we read it again."

Based on both parts of the blurb it is possible that the story is told in a epistolary form.

Sounds interesting. Logan is right, though, the cover art does give the impression of YA.

I like stories about the fay seeping through to our world. Fairie Tale by Raymond Feist is a favorite of mine, but I've not found another quite like it that has satisfied me the way it did.

ediFanoB - thanks for that, though I had actually already seen it. But yeah, think you could be right.

Kristopher - I really didn't like Faerie Tale, as it happens. Thought it couldn't decide whether it was horror or dark fantasy and ended up an uncomfortable mix of both. Didn't work for me at all.

That's okay! It's just one of those books that I can get lost in for a few hours, ya know? Not great literature, I know, but it takes me to a comfortable place. Doesn't everyone have at least one book like that?