The Last Page - a more interesting debut for 2010?

I've been rather underwhelmed so far with the slated fantasy debuts for 2010; nothing's really grabbed me so far. Some of the books sound moderately interesting, but there's a depressing air of familiarity about them. However, The Last Page by Anthony Huso sounds a little more interesting. Here's one cover (not sure if it's UK or US, but a different, coloured cover can be found on Huso's website). 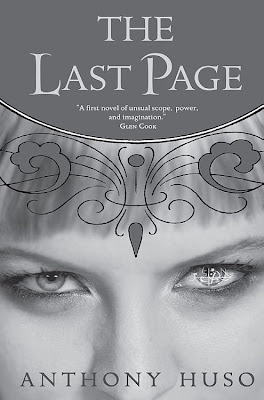 And here's the blurb:
"After graduating from a prestigious college, Caliph Howl reluctantly returns to the Duchy of Stonehold and assumes his role as the country’s last living heir. But when the curtains are drawn back on the dark mechanisms of the Duchy’s capital, Caliph is appalled. Isca City flickers with blood-soaked mathematicians, underworld witches and lolling gas-lit slums. As he struggles with civil war, energy crisis and occult creatures he is initially elated when his college obsession — Sena Iilool — arrives.
What he doesn’t know is that Sena has found and brought with her the Cịsrym Tạ, a book fabled to contain omnipotent numbers: the veritable academese of gods. It is her agenda to unlock the book’s secrets at any cost, even if it means betraying Caliph’s trust.
As the new power couple at the center of the Duchy’s greatest political storm, both Caliph and Sena are forced to grapple not only with relentless forces in the city that would see each of them dead, but with the complexities of their own relationship and the primordial peril unleashed by Sena’s obsession with the Cịsrym Tạ."
This blurb grabbed me more than those for other debuts I've read recently. Granted, it doesn't sound amazingly original (what does, these days?) but for some reason I'm more intrigued by this debut than many of the others due for release next year. While fabled, forbidden books are an old staple of fantasy, it's a trope that could be used in some interesting ways, so I'm curious to see what Huso does with it. Very possibly one to watch next year, The Last Page will be published by Tor in the UK and US on 17 August 2010.
Thoughts? Does the blurb grab you?
Posted by James at 18:56

I don't hold originality as highly as I do great characters and a gripping story. If the latter two are present, I can overlook nearly anything.

Concerning this particular blurb, it does grab my interest. I will definitely be looking for reviews when it is released.

This one does sound good, though.

"the veritable academese of the gods"?