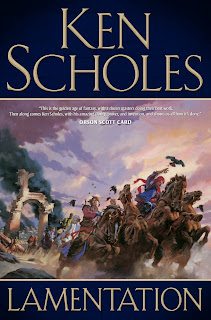 Voting for the 2009 David Gemmell Legend Award is now open, so if you fancy getting involved then head over to the website and cast your vote. As mentioned already in other quarters, there are two new categories this year - awards for best fantasy debut and best fantasy artist, alongside the original award for best novel.
The longlist for the 'best novel' category is, as usual, ridiculously long and I can't be arsed posting it here. There's no point debating this list anyway, since the nominations mean nothing - it's only when the shortlist is created that the debate can begin. You can check out the nominees here.
It's worth listing the nominees for the 'best debut' category, since there's only a few (making analysis much easier). Here they are:
The Sad Tale of the Brothers Grossbart - Jesse Bullington (Orbit)
Lamentation - Ken Scholes (Tor US)
The Dwarves - Markus Heitz (Orbit)
The Adamantine Palace - Stephen Deas (Gollancz)
Blood of Ambrose - James Enge (PYR)
The Drowning City - Amanda Downum (Orbit)
The Cardinals’ Blades - Pierre Pevel (Gollancz)
Servant of a Dark God - John Brown (Tor US)
Midwinter - Matthew Sturges (PYR)
My money is on either The Adamantine Palace, The Dwarves or The Cardinal's Blades to win this award. The Adamantine Palace has apparently sold pretty well and received some decent coverage online, so I expect a strong showing from Stephen Deas' debut novel. As for The Cardinal's Blades and The Dwarves, it's worth noting that their respective authors, Pierre Pevel and Markus Heitz, are both established continental authors who are eligible for this award as both books represent their first English translations, so they count as debuts. Sapkowski was largely propelled to victory last year on the back of votes from overseas readers, and I just wonder whether the same thing might happen this year in Pevel's or Heitz's favour. Time will tell...
As for the others: Servant of a Dark God and The Drowning City haven't been out that long, so I doubt whether they've got a big enough following, while Blood of Ambrose and Midwinter didn't seem to cause much of a stir (from the reviews I've read, both seem mediocre offerings). The Sad Tale of the Brothers Grossbart is an odd one; from what I've read it apparently has minimal fantastical elements, but I don't know much else about it. Lamentation might be an outside bet, but I'm not sure whether it will receive much backing from UK readers (then again, with most votes coming from outside the UK this might not matter).
If you're wondering where Nights of Villjamur is, it's not eligible for inclusion since it's not Mark Charan Newton's debut novel. It is instead in the mix for the main award for 'best novel'.
Posted by James at 17:46

I didn't know Heitz' first Zwerge-novel has been translated into English. Nice to see that - it doesn't happen very often that German Fantasy makes its way into the English market (other translations like fe. Russian, Dutch, Swedish or Polish are more common).

Tastes are different. I voted for Lamentation by Ken Scholes.

Anyway for me as a German it is interesting to see that a German author entered the nomination list. I read The Dwarves in German. I'm sure there will be a lot of people who will like it. For me it was not bad but not above average.

I'd been eying Lamentation for some time, and finally bought it last weekend. I'm looking forward to seeing what it has to offer. The others I will have to put on a list to have a look at.

I see your comments on Kirsten's Scribbling Corner from time to time, and I recently checked out your blog as well. It's so strange, the blogosphere is so vast yet so small at the same time. Nice to "see" you here as well!