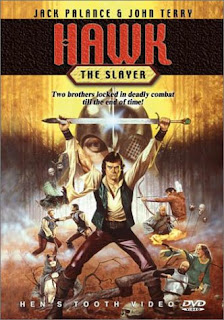 This news surfaced earlier this year, though I didn't see much mention of it in the blogosphere and so decided it warranted a post.

If you're unfamiliar with Hawk the Slayer, all you really need to know is that it is one of the worst fantasy films ever made - it's one of those films that is so terrible that it's funny. A laughable mishmash of bad fantasy clichés, the film follows Hawk (who has less charisma than a corpse) on his quest to defeat the Evil Dark Lord™ Voltan (comedy bad guy name 4tw!) who - wait for it - just happens to be his brother.

The script is awful, there are glaring continuity issues (watch the 'magic gate' scene) the plot is hopelessly pedestrian, the acting is wooden, the soundtrack is abysmal, and the 'special effects' are dire even by 1980s standards. One of the film's few redeeming qualities is the inclusion of an elf that can fire arrows at a rate that would - in the words of Shadows of the Apt author Adrian Tchaikovsky - "impress an AK47."

In short, it's a diabolical mess of a film and subsequently very, very fun to watch while drunk. Somewhat unsurprisingly, Hawk the Slayer has become something of a cult classic. Nonetheless, the news that a sequel is in the works still came as something of a surprise (to put it mildly). 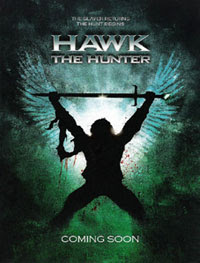 Tentatively titled Hawk the Hunter, the sequel is allegedly being directed by Terry Marcel, who wrote and directed the original film. On the basis that the slated budget - £10 million - is tiny, and the fact that the first film is total and utter dogshit, I don't hold out very high hopes for the sequel.

That's if the project even gets off the ground - for some reason I have serious doubts this sequel will ever see the light of day, and that's probably a good thing. Then again it would be interesting to see whether Marcel can deliver a film that is as mind-numbingly crap as the first one.

Still, on the positive side it's been 29 years since the first film was released, so if the sequel does materialise then at least Hawk has had plenty of time to cultivate a personality. And we can but hope that in the intervening decades Gort the giant has grown a few feet (he's barely over six foot tall in Hawk the Slayer), that Crow the elf has managed to hang on to his AK47, sorry, longbow, and that Baldin the dwarf has found a way to transcend death in order to join his chums on their quest (well, someone has to make the crap puns, and besides, having a whip-wielding dwarf was one of the very, very few moments of originality in the original film).
Posted by James at 12:57

All you should ever need to know about HAWK THE SLAYER:

SEE HOW IT GLOWS!

"I once punched a man in the face for saying HAWK THE SLAYER was rubbish. I later realised I had been defending the fantasy genre with terminal intensity. What I should have said was, 'Okay Dad, but let's watch KRULL and see what you think.'"

Check out the 'Hawk The Slayer' page from Badmovies.org:

This is the greatest idea anyone has ever had in the history of anything.

Adam - thanks for the link, I'd forgotten some of those highly amusing moments. The flourescent bouncy balls get me every time... Hawk the Slayer makes Krull look like the best fantasy movie ever.

Sam - no, it's not. Really, it's not! At least the first film is so utterly terrible that it's good. The sequel will probably just end up being total meh, like the Dungeons and Dragons film...

Best thing about Hawk the Slayer is all the Brit actors in side roles chewing the scenery, plus Jack Palance taking big chunks out of it himself. The worst thing about Hawk is the guy playing Hawk. He really has no acting ability or even charisma, and is just depressing to look at on screen.