I hugely enjoyed Andy Remic's Kell's Legend a few weeks ago, so naturally am looking forward to the sequel, Soul Stealers, which is due for release from Angry Robot in May 2010 (June in North America). Here's the artwork: 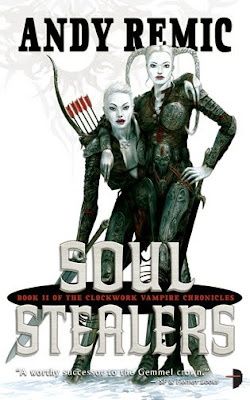 The only blurb I can find so far gives little away:

"The sequel to Kell’s Legend – more blood-soaked, action-packed, vampire-laced dark epic fantasy. Kell is being hunted. The vampires are fighting back against him, and the mighty hero finds himself the prey of two beautiful but deadly vampire assassins.

Their bronze fangs are coming for him.

He will strike back."

Have to say the cover doesn't do much for me - I like the continuity in terms of style, but the image itself doesn't strike me as having the power or presence of the cover for the first book. Still, I don't much care since this is a series that has already well and truly hooked me. If Soul Stealers is as good as its predecessor, then we're in for some serious entertainment...bring on the carnage!

Now, I like this cover, I would pick this book up to take a look because of it. I just took a peek at the first cover via your link and I think that one is a little misleading. It says more high fantasy than vampire novel to me. It does sound like a good series though so will definitely look into it some more :)

Gotta disagree with you on this James, the cover is cool enough and probably even better than the first one.

The cover looks like the game art from Persona and Shin Megami Tensei. Interesting.